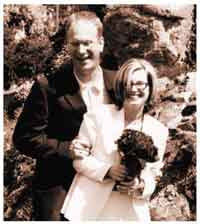 Since this is my first foray into blogging, I thought it would be appropriate to start out with my wedding story, so here goes (bear with me, it’s a long one, but a good one I promise!):

When Terry and I first met, I told him that when I get engaged, I wanted to have a really good story. Never one to shy away from a challenge, he took this to heart and not only gave me a great story but a truly amazing weekend. I hope that you’ll indulge me in telling this tale as I told it to our friends and family…travel back with me to Monday, April 9th, 2001 and here’s the abbreviated version of the email I sent out sharing our happy news:

“Let me get right to the point…I got engaged and married this past weekend – all to my great surprise! Yes, it’s true, I’m now an old married broad!

My boyfriend (now husband, YIKES!) planned the whole entire thing down to the last detail. Here’s the thing, I wasn’t expecting any of this. We’d been planning a trip up to Santa Barbara next weekend and I was absolutely convinced that would be when he proposed – AND, we’d been talking about going abroad in July to get married. Needless to say, all of that was just to throw me off course, which worked brilliantly! I’ve never felt so gullible in all my life once I discovered all of this!

We went up to Victoria, BC for the weekend with two friends – Margie and Thom – for what I thought would be just some R&R. Little did I know that Margie and Thom, were Terry’s partners in crime.

We stayed at a luxurious and charming bed and breakfast, Fairholme Manor (fairholmemanor.com), which provided the perfect backdrop for the weekend’s festivities. Come to find out, the b&b’sowner Sylvia Main was another of Terry’s partners in crime, helping to coordinate many of the details for our wedding day. She was a delightful hostess!On Friday, Margie’s mission? To keep me busy all day. So being the spa girls that we are, Margie and I trekked off to the spa for some pampering. Margie also insisted that I get a manicure (I’m so thankful she did!).

Later that evening, Thom and Margie were actually supposed to go out to dinner with “friends” who were coming up to see them. Conveniently their “friends” couldn’t make it for dinner, so we invited them to join us. So at 8pm, we arrived at Villa Rosa for dinner. Immediately, I should have known something was up, because the minute we walked in the door, everyone stared at us and this blatant staring continued as we sat at our table. Then, at 8:25pm, Margie and Thom got up to go to the bathroom – nothing out of the ordinary. Next thing I know, Terry mentioned something about a Bruce Springsteen song playing overhead (we’re huge Springsteen fans, but that’s another story for another time). My reply was, “Oh, that’s nice,” because I really couldn’t hear the music…at which point, Terry slid off the end of the booth, got down on one knee, which was the cue to everyone in the restaurant to hold up their signs saying, “Say Yes!” (While Margie and I were playing spa divas, Terry and Thom had dropped the signs off, along with the Bruce CD). This explained why everyone kept looking at us! Honestly, I thought it was a joke, but the minute I saw Thom in the back with the video camera, I realized that this was truly happening. Terry “popped the question” and poof, we were engaged. Thankfully, Thom was videotaping the entire thing because I was so taken aback that the entire evening was a blur. But it doesn’t stop there…the story gets even better.

The following morning, Terry brings me a gift of diamond earrings – he said that I needed a new pair for my wedding day. Still believing that we were getting married in some exotic locale in July, I said that was very cool, but our wedding day wasn’t until July. This is the point when I was finally let in on the secret that everyone else seemed to know…Terry’s reply, “No, today is your wedding day!” Yep, Terry had arranged everything: the marriage license (something unique about Canada – only one person needs to be present when applying for the marriage license – something else that Terry and Thom did while Margie and I were at the spa!), the flowers, the music, the clothing (yes, ladies, he bought me an ivory, silk suit to wear and brought a pair of my shoes to match!). So at 11am that morning, we were married on the balcony at the b&b where we were staying – overlooking the ocean and the mountains. Incidentally, by sheer coincidence, one of the harpists that Terry had arranged to serenade us during and after the ceremony, sang “our” song – I thought for sure that Terry had arranged that too, but he insisted that he had not. For me, it was the perfect wedding.”

A month later, we honeymooned in Paris, and a few weeks after that we held a reception at one of our favorite restaurants In Malibu where our friends and family could celebrate our marriage with us. At the reception, Terry played our wedding video. Want to see it? Well, here you go (oh, it doesn’t start until about 25 seconds in, so be patient!).

Fast forward to 2008, we’ve been married nearly eight years now and each time I think about that weekend, I still get chills. I’ve told this story a million times, and I couldn’t ask for a better story to tell!

Now that we got that out of the way, let’s get started making YOUR wedding story!
P.S. Want to see the really cool post-wedding shoot that I was lucky enough to do with Sarah Maren with the fru-fru white dress that I always wanted?  Well, check this out:  realweddingsmag.com/now-the-rest-of-the-story/
SHARE   TWEET   PIN IT   EMAIL

What are you looking for? One good thing to come out of the pandemic: love!